We are beyond delighted to report that the much-abused young elephant Sunder has arrived at his new home, Bannerghatta Biological Park, where he is to reside by order of the Supreme Court of India.

Park officials have assured PETA that the entire 49.5-hectare forested area for elephants will be fenced in to allow the herd of 13 elephants – which Sunder will join once he has settled down and his serious leg wound caused by long-term painfully tight chaining has healed – to roam freely. Veterinary experts are working to address this wound.

Sunder has suffered greatly for years. He has been badly beaten and otherwise abused and so will need to be introduced gently to a different way of being handled, quarantined for health testing and loosely restrained as his injuries and health are assessed and as he comes to trust his new caretakers.

~~Here are some pictures of Sunder and of his new home~~

PETA continues to engage with elephant expert advisers in India and abroad in order to help with the transition. We have overcome immense hurdles – including unscrupulous behaviour, the deliberate dissemination of misinformation, attempts at religious blackmail, enormous pressure from sundry quarters, court battles and political corruption – during our efforts to rescue Sunder from the clutches of his physical abusers and mental tormentors.

We are ever so grateful to every single soul who found a way to help and who joined the #FreeSunder campaign, thereby becoming part of this joyful outcome. More than 220,000 people from around the world wrote to authorities seeking Sunder’s release through action alerts on PETA affiliates’ websites. Many celebrities – including Paul McCartney, Amitabh Bachchan, Madhuri Dixit, Pamela Anderson, Arjun Rampal, R Madhavan, Gulshan Grover and others – took to Twitter or helped in other ways to keep the spotlight on this long campaign for Sunder’s release.

At one point, Maharashtra Minister of Forests Dr Patangrao Kadam and the Project Elephant division of the Ministry of Environment and Forests issued orders for Sunder’s release, but those orders were ignored. Senior Counsel Shiraz Rustomjee and Counsel Rohan Rajadhyaksha won for Sunder in the Bombay High Court. M/s K Ashar & Co Advocates & Solicitors were the advocates on record for PETA for the cases in the Bombay High Court and Supreme Court, and Senior Counsel Raj Panjwani won the case for Sunder in the Supreme Court.

We thank Suparna Ganguly of the Wildlife Rescue and Rehabilitation Centre for her support of the campaign and MP Maneka Gandhi, who helped us greatly by using her significant authority to end the stalling. We also thank Naresh Kadyan of OIPA for trying to bring Sunder’s abusers to justice.

We are also thankful to the Maharashtra Forest Department and numerous veterinary and other elephant experts for assisting with Sunder’s move to Bangalore, and to scientist Surendra Verma and animal behaviour consultant Margaret Whittaker for guiding us in other ways.

The elephant care centre at Bannerghatta Biological Park sits in a wonderful natural forest with ponds and streams and will serve as a safe refuge for Sunder. It also has the potential to develop into a world-class facility. 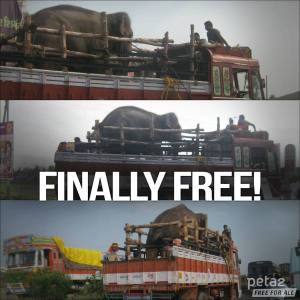 PETA India, based in Mumbai, was launched in January 2000. PETA India operates under the simple principle that animals are not ours to eat, wear, experiment on or use for entertainment, while educating policymakers and the public about animal abuse and promoting an understanding of the right of all animals to be treated with respect.

PETA India focuses primarily on the areas in which the greatest numbers of animals suffer the most: in the food and leather industries, in laboratories and in the entertainment industry.