Today was a very special day for many who fought for the Confederate flag to come down from the Capitol grounds in Charleston, South Carolina.

The precipitating event to bring this to fruition occurred on the evening of June 17, 2015.

Nine people were killed, including the senior pastor, state senator Clementa C. Pinckney; a tenth victim survived. The congregation is one of the United States’ oldest black churches and has long been a site for community organization around civil rights.

Not living there, I’m not privy to the state’s politics, debates and local discussions. I’ve seen this political “personality” on the news recently. I’ve seen her impassioned expressions about the removal of this symbol of hate, racism and slavery.

Come to find out … it’s all a political ruse. She had no option and to “look good” in the many eyes that were watching, she had tried to be a spokeperson to do what was right. HortyRex©

I’m so sick of Nikki Haley getting so many accolades for undoing something that should never have been done in the first place.

She won the Governorship partly because her opponent wanted to take down the Confederate flag but she supported its presence. 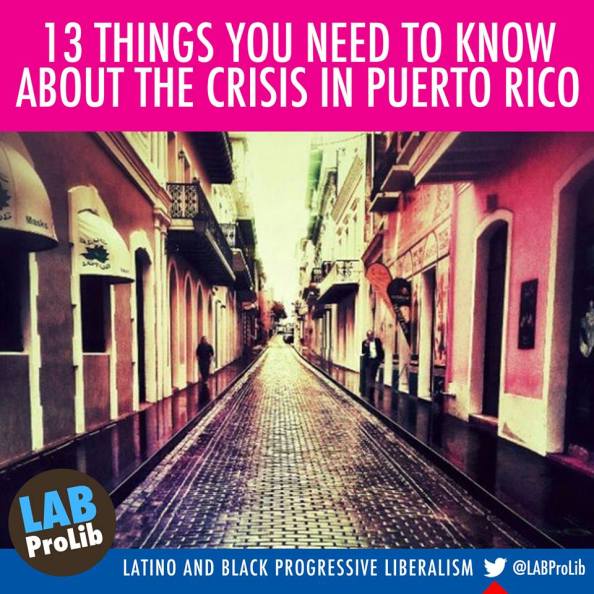 Any Latino on social media knows one thing:

There’s a crisis in Puerto Rico.

It can be difficult to keep up, especially when this news involves complicated issues like taxes and investments. To help keep you in the loop, here’s 13 things on the critical matters happening right now on that tropical island just 1,150 miles from Florida’s waters.

1. Puerto Rico is struggling to emerge from its recession. While the rest of the U.S. is experiencing economic growth, La Isla del Encanto has not been able to draw itself out of a 9-year recession. The U.S. territory has a 15.4 percent unemployment rate, with per capita income around $15,200 (that’s half of Mississippi’s, the poorest state in the U.S.).

2. This harsh economy is pushing thousands off of the island every year. Puerto Rico is experiencing the largest migration wave since the 1950’s. Rampant crime and a dwindling economy have pushed so many people out of the island that, for the first time in history, there are more Puerto Ricans living in the U.S. mainland than there are on the island.

3. Economists fear that this mass migration leaves little hope for the island’s economic recovery. Orlando Sotomayor, an economist at the University of Puerto Rico, told the New York Times that “the phenomenon is highly uncommon and underscores the lack of hope that the ship can or will be righted.”

4. The Caribbean island is more than $72 billion in debt. To put that in perspective, this is the U.S.’ third-largest municipal debtor, behind California’s and New York’s, though the island is both significantly smaller and poorer than both states.

6. Standard & Poor’s, a U.S. financial services company, slashed Puerto Rico’s rating to B, a non-investment grade. This has essentially frozen Puerto Rico out of the bond market. Over the last few years, investment companies like AllianceBernstein have sold their Puerto Rico holdings, with others hesitant to invest without a signpost of increased revenue.

7. The recent passing of a sales-tax bill can be that sign. Unfortunately, while the 4.5 percent hike in sales tax is expected to bring in $1.2 billion in new revenue, and generate more investments for the island, it’s bad news for the people of Puerto Rico, especially the poor, who will now have to pay a whopping 11.5 percent sales tax.

8. In an effort to pay the island’s utility investors, Puerto Rico is negotiating a restructuring of its public power company. The plan, which is likely to be approved by the end of the month, would definitely increase the electric rate for the island’s residents. Critics of the overhaul, like Puerto Rico’s delegate to Congress, Pedro Pierluisi, believe the increase “will not benefit anyone.”

10. However, there still remains a healthcare crisis on the island. The Center for Medicaid and Medicare services will soon execute an 11 percent cut in Medicare Advantage reimbursements, which will cost Puerto Rico’s health-care system nearly $500 million. About 60 percent of the island’s population relies on Medicare, Medicare Advantage or Medicaid to pay for their health care. Last month, the Washington Post reported that doctors practicing in Puerto Rico are forced to get by with much smaller Medicare and Medicaid reimbursement rates than those received by others on the continental U.S.

11. Puerto Rico’s recession has also injured the island’s housing market. According to Fox News Latino, call for sales are expected to be just 15 percent of what they were a decade ago. President of the Puerto Rico Home Builders Association (ACH), Roberto Trapaga, said “when the time comes to buy a house, people don’t have the money,” adding that banks, which have also been hit by the crisis, have tightened the requirement to obtain a mortgage loan.

12. Whether Puerto Ricans own a home or not, water-rationing measures in San Juan have left thousands of islanders without water. The measures, imposed because of an ongoing drought that has lowered Puerto Rico’s main reservoirs, have limited access to water to just every other day for more than 160,000 people living in and near the capital.

13. Good news (kinda): Puerto Rico’s tax hikes and budget cuts are expected to assuage the island’s economic woes. Writing for NPR, economic reporter Greg Allen reminds us that both New York City and Washington, D.C. saw similar fiscal problems and eventually found stability. Unfortunately, fiscal recovery for both cities also brought along with it the process of gentrification, which has displaced much of the areas’ impoverished communities of color, a fate we are already seeing in Puerto Rican barrios like Santurce.

“As it appears in …. full and total credit of information and main graphic”

~Puerto Rico’s Financial Crisis: Is The Island The New Greece?~

The island is in dire financial conditions and it is thousands of U.S. mom-and-pop investors that might lose a big part of their savings if the small territory goes bankrupt.